Which Kindle Fire Tablet Do You Have? 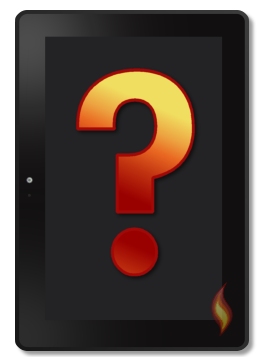 If you received a Kindle Fire tablet as a gift, won it in a giveaway, or even if you purchased it from Amazon you may not know which one you have.

That's okay, you're not alone, I've had several site visitors ask me how they can tell which Kindle Fire tablet they have.

And here is where I show you how.

There are currently 18 different Kindle Fire tablets, if you don't count the kids editions or tablets that used to come with a 4G version, which I don't*.

Here's a list of each device in order from the year it was first released, to help answer the question "Which Kindle Fire do I own?":

"But which Kindle Fire tablet do I have?" you ask. Well, let me show you.

*I don't count Kids Edition tablets in the total count since they're basically the tablets from the same year but with a specific amount of memory, a cover, and a few other minor customizations.

Update: Unfortunately, this infographic hasn't been updated for a few years. It was too hard to keep fitting in more and more Kindle Fire generations being added every year. Also, the Kindle Fires from the last few years have all been VERY similar, making it hard to tell them apart unless you use the info given in the next section below. So I suggest you see that instead.

Which Kindle Fire do I own?

There are a few simple ways to discover which Kindle Fire you have. For fun I created this fabulous infographic (yes, I think it is fabulous- it took me hours to make and hours to update every time new tablets are released).

This lovely flowchart asks you questions, you answer yes or no, and it shows you which Kindle Fire you have. (I rock!)

Just click the image below to see the EXTRA LARGE version of this beautiful infographic! (You'll probably need to zoom in to read all the details.) 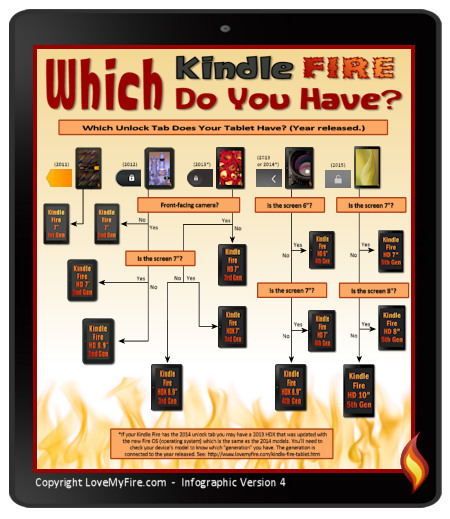 Due to Amazon coming out with new tablets ever year, there have been a few versions of this infographic.

Know Which Kindle Fire You Have: Device Model

The FASTEST and EASIEST way to figure out which tablet you have is checking the actual device model in your tablet's settings. Kindle Fire tablets from 2013 and newer have the setting that tells you which model you have.

Slide down the quick menu and tap "Settings" then tap "Device Options".

On this screen if you look near the bottom you'll see "Device Model" and under that you should see which Kindle Fire model and generation you have. 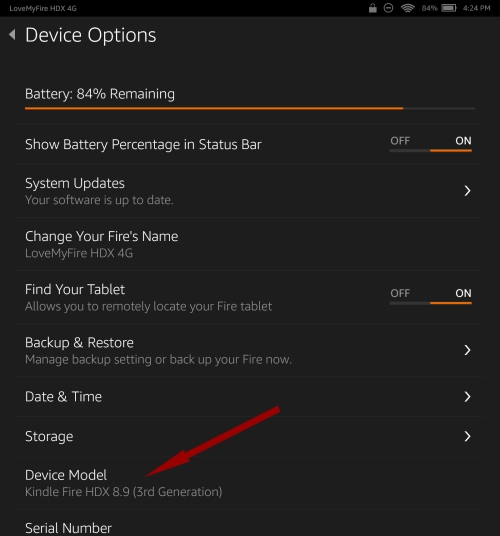 Amazon labels their Kindle Fire generations based on which year the device was released.

The first year they created the Kindle Fire (2011) is the 1st generation.

Another way to know which tablet you have is to check the Kindle Fire specs and then determine which year your tablet was released.

First, look through Amazon's technical specifications for each Kindle Fire (below) and find which physical features your tablet has.

Second, some versions of the Kindle Fire are the same physically on the outside. Once you narrow down the possibilities, you'll need to determine the year of your tablet, which I'll explain below under the Kindle Fire specs.

The technical specification images for the Kindle Fires below are from Amazon. If you select either the link or the image it will take you to Amazon's product page for that specific Kindle Fire which is where I found the tech specs. This Kindle Fire 1st generation looks the same physically as the second generation (next one below) which has the full technical specs.

More about this tablet here: The operating system for this 6" tablet has been updated with the new 2015 software. See the 2015 version farther below for details.

Notes: Has a front-facing web camera and a rear-facing camera. Notes: This tablet is actually exactly like the 2014 model except with the 2015 operating system. Thus the hardware has not been updated but the software has. Notes: This tablet is basically the 2015 7" (NON-HD) tablet with a "kid-proof" cover, a 2-year guarantee, and a year subscription to Amazon Kids+ More details:
New Fire Tablets for 2020 and My Review of the 10th Generation HD 8

Unlike the 2018 (8th generation) 8" tablet, this version does NOT support wireless charging.

If that's something you're looking for, you'll now need to purchase the Fire HD 8" Plus (below) along with the All New Wireless Charging Dock (available separately). Note: This tablet is also sold as part of Amazon's new Productivity Bundle, which includes a detachable case and keyboard.

Note: This tablet is also sold as part of Amazon's new Productivity Bundle, which includes a detachable case and keyboard.

Ideal for kids between 3 and 7 years old

Includes one year of Amazon Kids+

Determining the Year Your Kindle Fire Was Released

Alright! With the Kindle Fire specs above, you should either know exactly which Kindle Fire you have, or have it narrowed down to two possibilities.

If you've narrowed it down but still aren't sure, take a look at the unlock tab on your screen (the one that comes up when you first turn on your Kindle Fire):

Alright, now you should know which Kindle Fire tablet you own and how Kindle Fire generations are labeled!

That's pretty much all there is to it... until Amazon comes out with even MORE versions the next year. *gulp*

P.S. Be sure to see all my other great Kindle Fire resources including everything the Kindle Fire can do!

If you found this tutorial helpful please let me know by posting a testimonial, leaving a comment at the bottom of this page, posting your thoughts on my Facebook page, or sharing this page with others (see share options at the bottom). Thanks!

By Christine Albury, Owner of LoveMyFire.com
©Copyright 2021 Love My Fire All rights reserved.