This new baby has some nice specs, particularly an all-new software feature many people are going to be excited about. So let me tell you all about it! 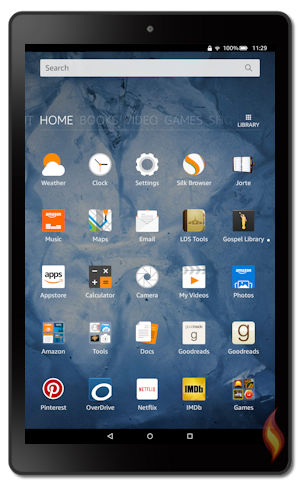 If you compare it to the 2015 8" HD model you'll find only a few differences. The main ones are:

Okay, that last one is a biggie, and the better battery and memory option is definitely a plus, but lower MP for the rear-facing camera definitely isn't cool.

The buttons and ports are in the same place and it comes in the same four color options too: black, magenta, blue, and tangerine. It is .1" (that's POINT 1 inch) thicker at .4" than last year's .3", making it 1.0 ounce heaver- practically unnoticeable.

You can also check out my 2015 tablet page to learn about all of that year's Fire releases.

The actual good news with this latest release is a new feature that will be coming soon.

When ready, a new OS (operating system) will be released to both 2015 and 2016 Kindle Fire tablets which will have a new "Alexa" feature- like that of Amazon's Echo devices (I still use and love mine)!

This feature will allow you to "talk" to your tablet like you do an Echo or other moble devices. Alexa is cloud-based so you'll need to be connected to the Internet (through Wi-Fi) to use it.

Also, to activate it you have to push and hold the home button for one second. Personally, this seems to defeat the main point of a voice controlled system. *shrug*

Other than that, this 6th generation of Amazon's Kindle Fire is a bit of a let down. :(

However, the new low price does smooth things over a bit.

If you're looking to buy a new tablet for yourself or someone else, be sure to check out this new 8" HD Fire!

Oh and if you want my recommendation regarding memory, I'd say go with the 32 GB. However, the new tablet does have the micro-SD card so you can always upgrade later!