Tips for Finding and Using Kindle Fire Apps on Your Tablet! 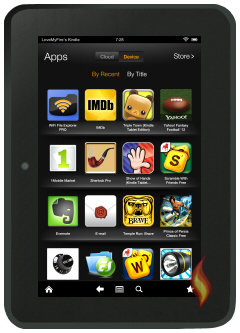 I love playing with my Kindle Fire apps, they are one of my favorite things about my tablet (other than its portable size).

I really enjoy browsing, searching, and downloading new apps. Of course the best part is testing them out by using and playing with them.

Android apps comes in a huge variety of types, including game apps, utility and tool apps, music apps, book apps, and many more; it almost seems like there's an app for everything!

This page has a ton of important information about downloading and using apps, (both paid and free) as well as security apps for you and your kids. 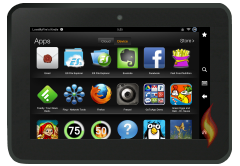 Want to know which are the best apps for improving the basic use of your tablet? These apps improve the Fire's volume, battery icon, dimmer, app organization, Wi-Fi info, and more!

Just sign up for my Kindle Fire Alerts to receive access to an exclusive list of the Best Kindle Fire Apps- they are well worth looking into.

Update: This list has been revamped and newly updated!

Unfortunately, not all android apps work on the Kindle Fire, including some found in Amazon's online app store, but you can filter your browsing to only see those that are compatible with your favorite little toy.

Fortunately, if you're browsing for Amazon apps on your Kindle Fire then you'll only see those apps that do work with your tablet.

What's great is that with the Fire's rise in popularity more and more apps are being developed and added to the Amazon appstore every day, so if you see an app you really want but can't have, chances are it will eventually show up. 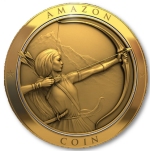 A really cool new feature of the Amazon App Store are Amazon coins.

All current Kindle Fire owners, and any new owners during the rest of 2013 will be given 500 FREE coins to spend on apps, games, or in-app purchases!*

Learn how to use your coins, buy more, and check your balance in this article all about these golden Amazon coins. 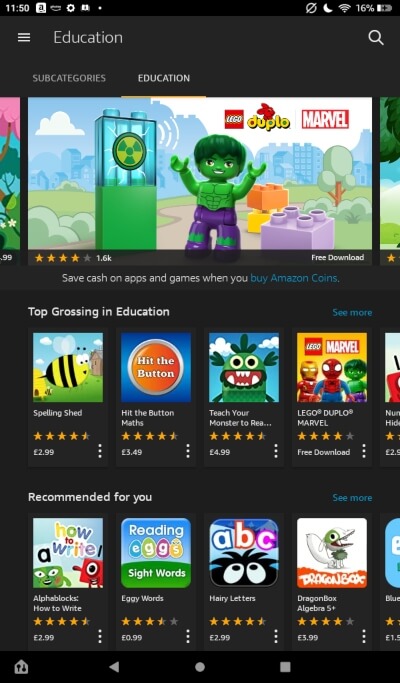 The Kindle Fire isn't just for playing games - it can be a valuable learning tool for children.

There are a ton of great apps out there to help kids get a head start in all sorts of skills, including literacy, numeracy, and even programming!

In this article I've brought together my favorites, all available in Amazon's app store.

Some are totally free, some are ad-supported, and some are paid. All of them have rave reviews and help make learning fun! 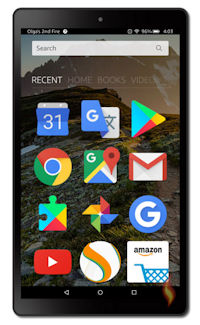 If you have a (relatively) newer Kindle Fire you can now install the Google Play Store!

Once you've done that you can use the Google Play Store on your Kindle Fire to install the Top 10 Google Apps, including Gmail, Google Maps, and YouTube, directly to your tablet!

See these two new articles and follow our step-by-step instructions for easily putting Google Play on your Fire and then searching for and installing not only Google's apps but any and all of your favorite apps from Google's Play store. 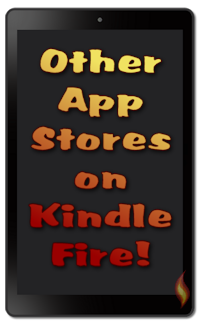 Yep, there are more! In this page, Olga lists the top four alternative app stores for Kindle Fire and how to install them on your device.

If there's just a specific app you want and you know where to get it, you can learn how to install android apps on Kindle Fire too. 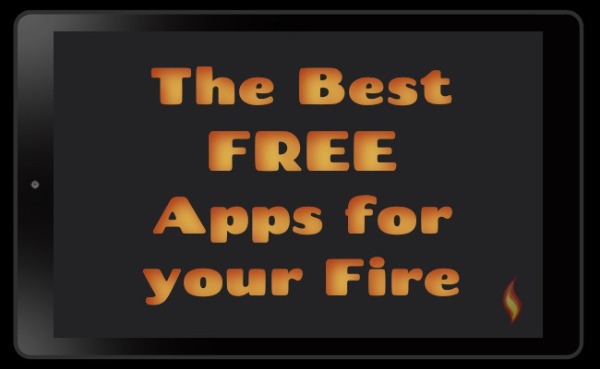 Great FREE Apps for Your Fire

There are some truly excellent apps available for your Fire that don't cost a thing.

Whilst some are supported by ads, many are completely ad-free.

This list includes all of my favorites, many of which I use on a daily basis. These include everything from weather apps to those that help me organize my day.

Audible App for the Fire 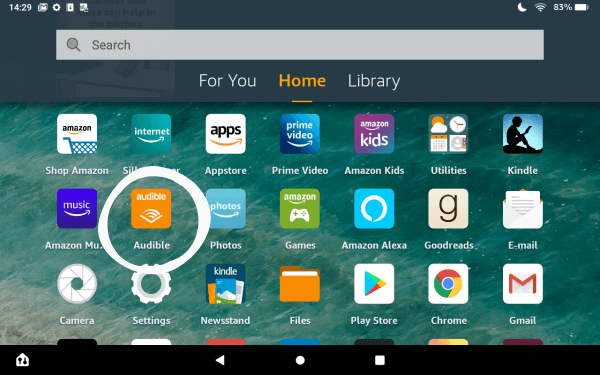 The Audible app comes pre-loaded on the Fire tablet and makes it easy to both find and buy audiobooks.

On this page, I explain just how Audible works and the different levels of membership available.

I've also included some tips for using Audible to make sure you get the most bang for your buck!

Learn more about the Audible app for the Fire tablet 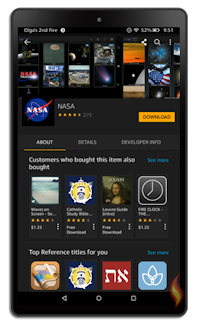 Do you enjoy studying the night sky, moon, or space? I do!

Or would you like to start learning more about the wonders of space? If so, this list of astronomy apps for Kindle Fire is for you!

NASA even has its own app, did you know that?

Check these out and enjoy the beauty of space! 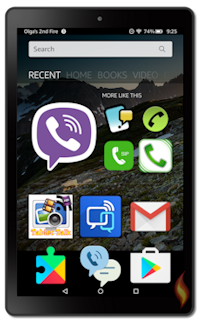 Although most people use their phones for texting, there's no reason why they can't use their Kindle Fire too! All you need is the right Kindle Fire texting app and you can text right from your tablet!

A big benefit for using your Kindle Fire to text is the size of both the screen and your keyboard.

Are your thumbs larger than your phone's keyboard keys? Mine are, which leads to a lot of typos and grumbling. Texting on your tablet can be a LOT easier.

See this list of texting apps for Kindle Fire and check them out! 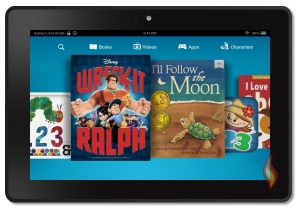 Use Amazon's Kindle FreeTime app to setup a Kindle Fire for your child(ren)! (Yes, it's free and easy to use!)

I'll show you to how to use this app, as well as the benefits and cost of subscribing to the Kindle FreeTime Unlimited service.

(Note: This app is not available on the first generation Kindle Fire which was released in 2011. See my section below on security apps for kids if you have this tablet.)

When checking out a new app to download to your tablet, here are some things to do first.

Read an app's product info before downloading an app. This is especially important to know if a game has in-app purchases which will charge you real money if used. My article About Free Kindle Game Apps goes into more detail about this. 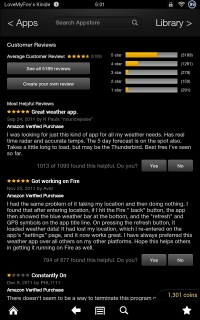 If you're not sure about an app, another thing to check is the developer's name (under an app's title and on its product info page) and other apps they've created. If their name only says "developer" then the creator of the app hasn't created or disclosed their company name.

To see other apps from a developer, tap the recommendations tab on any app's page (to the right of reviews).

Some apps will first list other apps that customers have also bought; scroll down until you see, "Other Apps by This Developer".

This list shows any apps the developer has available in the Amazon App Store. Reviews of those apps may provide useful information about a developer's products, especially if several apps have received a high number of poor/bad reviews.

Of course, this does not mean that the current app you are viewing is bad, it is just another way to more safely research the apps your use. 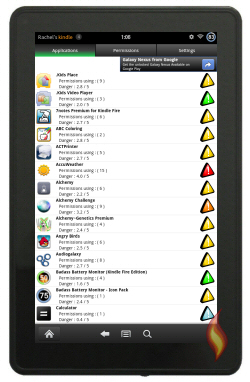 To be extra cautious you may want to use additional precautionary measures, such as installing some of these Kindle Fire Security Apps, which include an anti-virus, permission checker, and more! You may also like to check out our Top 4 Antivirus Apps for your Kindle Fire.

Fortunately, problems with things like viruses, malware, and spam are relatively low (almost nonexistent) right now on the Kindle Fire, but with the flood of new tablets on the market it's only a matter of time before these blood suckers start to catch up- the stupid jerks!

So it's a good idea to check into other security options for your device. 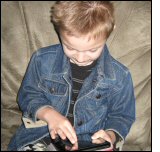 Also see my page about Kindle Fire Security for Kids to control what apps and videos they have access to.

It's safest to only download Kindle Fire apps from well known and reputable companies, stores, and sites. If you're looking for a specific app that's not available in the Amazon App Store, try the developer's website first. Sometimes you can download their apps directly from their site.

How to Keep Your Apps Updated 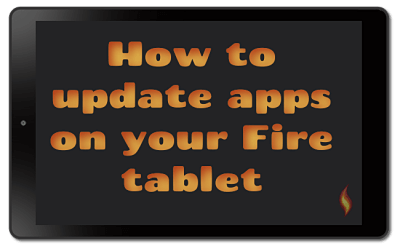 Keeping your apps up-to-date is important.

This is partly because developers are always adding new features to make their apps  more fun or efficient. But it is often because they have bugs that need fixing, or because they need to be made more secure.

See my article How to Update Apps on Kindle Fire to learn how to turn automatic updates  on and off, plus a special warning if you have downloaded apps from Google Play Store. 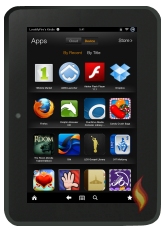 Amazon isn't the only place you can download Kindle Fire apps, although you'll first need to learn how to side load apps on your Kindle Fire.

Then you'll need to know where the alternative app stores are so you can find some fun new apps, compare prices, and give them a whirl on your tablet. See my FAQ on other app stores you can use, or check out how to get apps from the Google Play Store on your tablet.

Unfortunately, Amazon and Google refuse to play nicely together (meaning they won't share their apps with each other) so you can't directly download android apps from the Google Play Store onto your Kindle Fire without jumping through some hoops.

Fortunately, for those who have a (relatively) newer Fire, there's a way to work around this issue and you can now install Google Play Store on your Kindle Fire! 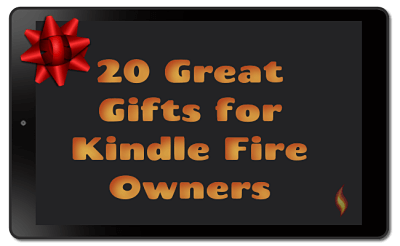