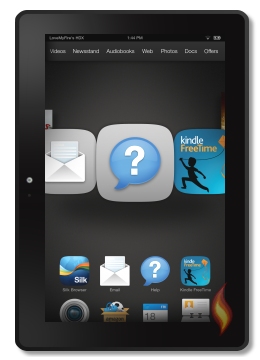 It's a GORGEOUS Kindle Fire with some really cool new features, but how about I SHOW you instead.

UPDATE MAY 2022: The latest Fire 7 has just been released. Click here to learn more.

First, let's take a look at what comes with this beautiful creature.

Here it's in its lovely sleeve: 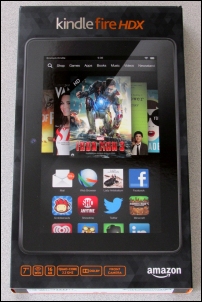 Box without the sleeve: 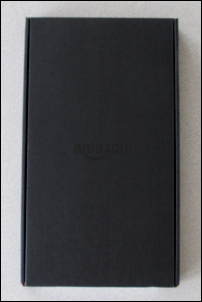 Now let's take everything out of the box and check it out! 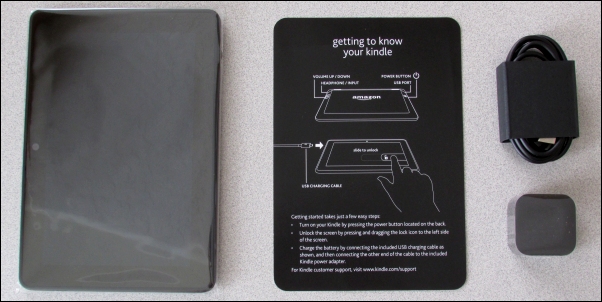 Amazon's Kindle Fire HDX 7" comes with the plastic wrapped tablet, a "getting to know your kindle" card, USB cable, and thankfully the power adapter (unlike the HD tablets which required you to purchase the adapter separately.)

If you haven't yet read my page about the Kindle Fire HDX go check that out to learn more about all the new features that come with this sweet baby, such as the Mayday button for almost-instant help! Then come back and finish reading this page. :)

One of the first things I noticed when I unwrapped my new HDX was how sleek, thin, and light it was! 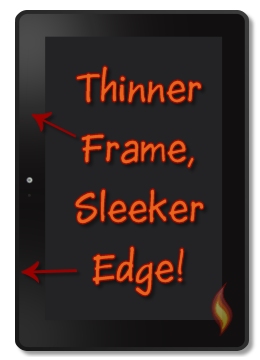 When compared to my HD 7" the HDX 7" truly is lighter! Both the border around the screen and the outside edge are thinner than the HD.

This makes the HDX a bit smaller than the HD, but not by much.

Front of the Kindle Fire HDX 7"

Most of the holes and ports on the HDX are in the same spot, except one. The micro-usb port is now on the left edge, the light sensor and front facing camera are at the top, the headphone hole is on the right edge, and there are now two (instead of just one) microphone holes on the top edge.

Here's a close up of the front of the Kindle Fire HDX 7" showing where all the holes and ports are:

Personally, I'm not too crazy with the location of the USB port, I liked it better on the HD, however, one really cool thing about the one on the HDX is that it's tilted.

This means that when you plug in your cable to charge your Kindle Fire HDX the cord angles out vs laying flat like all the others out there. Here's a picture of this: 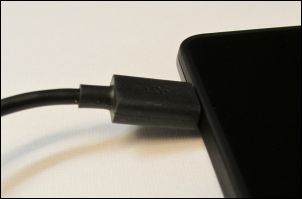 This makes it a bit easier to plug in, and might be beneficial in other ways, but I'm not quite sure yet and will have to investigate further. 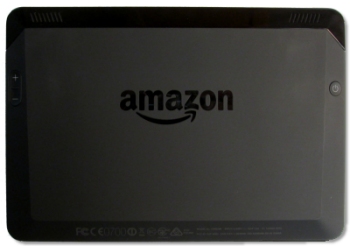 Back of the Kindle Fire HDX 7"

Let's take a look at the back of the Kindle Fire HDX.

As you can hopefully see in this picture, the back has an angled edge all the way around which I think adds to the sleek feel of this tablet, both visually as well as while holding it. It's also sporting Amazon's "smiling" logo.

Now let's zoom in and take a closer look at the top of the back, since that's where all the buttons are:

I like having the speakers higher up at the top, that's an improvement, in my opinion, bringing the sound physically up higher and thus easier to hear.

Another thing I noticed was the brightness and clarity of the screen. Here's one of the background images you'll see if you unsubscribe from the special offers: 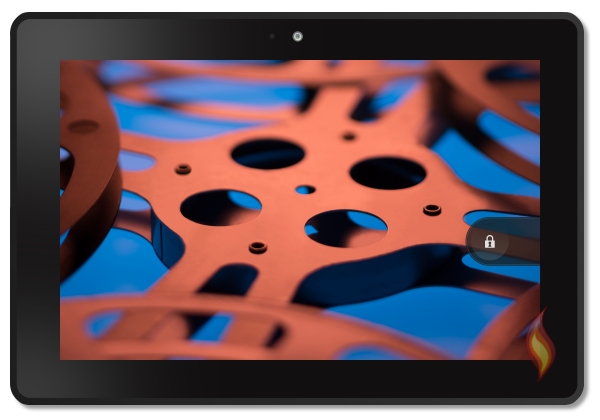 There are some changes to both the hardware and software of the new Kindle Fire HDX, some I really like (Mayday) while others I'm not as thrilled about (no HDMI port). I'm sure a few of the things I don't like are probably because I'm just used to the way things are on the other tablets.

BUT, overall I am extremely pleased with this beautiful new device! Did I already mention that I love how light it is? 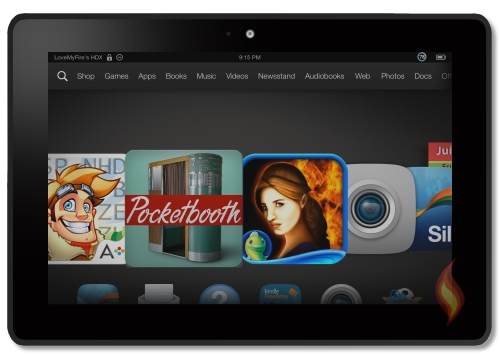 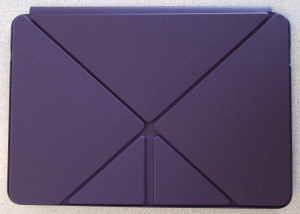 As with the other Kindle Fire tablets there are tons of Kindle Fire accessories you can use with the new HDX. I'll be reviewing Amazon's official "origami" cover and other cool stuff, so watch for those articles coming soon!

If you're itching to get your hands on one of these new tablets see my Kindle Fire HDX page for more details, and links to them on Amazon.

If you've already got one in your hot lil' hands, stay tuned for more great resources, accessories, backgrounds, and tutorials!