Favorite Games for the Kindle Fire 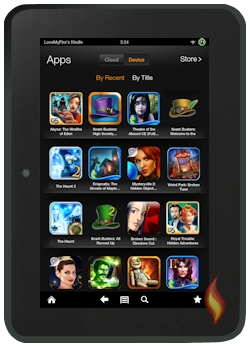 There are a ton of games for the Kindle Fire and I have a whole list of the best Kindle Fire games, but this list is of some of my favorite games!

These games are paid apps (a few have demos), so if you'd like to check out some free games and more free for the Kindle Fire, start there first.

However, I find that paying for an excellent quality game that you enjoy playing is worth the price.

If you haven't yet seen my picks for the best hidden object game and the best detective game for the Kindle Fire be sure to see the winners for each of those!

Detective Games for Your Kindle Fire

To start, I'm going to list my favorite type of games for the Kindle Fire, which are detective games, also known as "point and click games" (although that would just be "tap and tap" for a touch screen).

Many of these games have a hidden object aspect to them, while others do not.

They're not listed in any particular order either, not even alphabetically, which messes with my OCD, but it's good to shake things up now and then.

I really like the series of Snark Busters games for the Kindle Fire. It has a unique hidden object aspect to it that's different then the common and more traditional hidden object game.

It also has a creative feature where you'll go through mirrors to the "other side" of an area to find or change things that affect the other side.

As of this writing, there are three games in the series, which are listed in the correct order above. 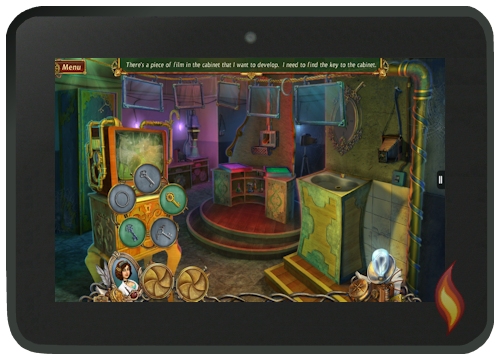 This is one of my favorite detective/hidden object games for the Kindle Fire! It has the perfect balance of graphics, puzzles, and spooky/creepy feeling. There are even a few times when something appears to "jump" out at you, or you suddenly see something in a flash of light.

My husband actually played this one with me, which was a fun to do together.

A fabulous game that is worth every penny spent. If you check the reviews, you'll see I'm not the only one who loved playing this game.

News: Enigmatis 2 is in the works (at least the opening screen of the first game says there is); I can't wait for it to be ready! 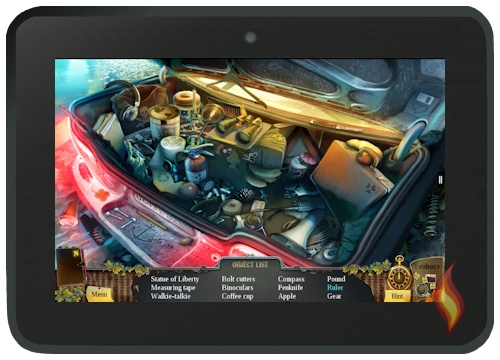 The "Haunt" games for the Kindle Fire are excellent and well worth paying two bucks for each of them! I love the graphics, puzzles, and spooky feel to these games.

Throughout the game you can find hidden moths (yes, moths) that can give you hints or let you can know if you've found all the puzzle pieces in the scene. 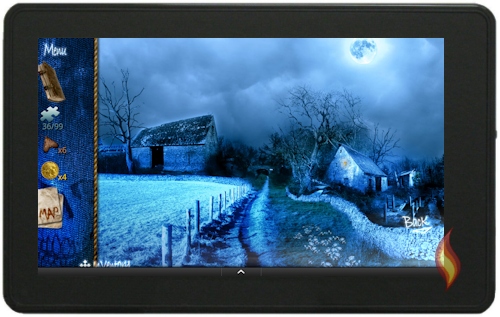 Empress of the Deep Series

This is another fun series of detective games for the Kindle Fire! I actually played the first on my PC a few years ago, but I played the second on my Kindle Fire.

I wonder if they will be adding any more games to this series?

This detective/hidden object game is true to it's name, it is a weird park alright! It has some great puzzles to solve, which I always enjoy in these types of games.

This game has an additional bonus chapter you can pay to unlock, which I did and enjoyed playing as well. 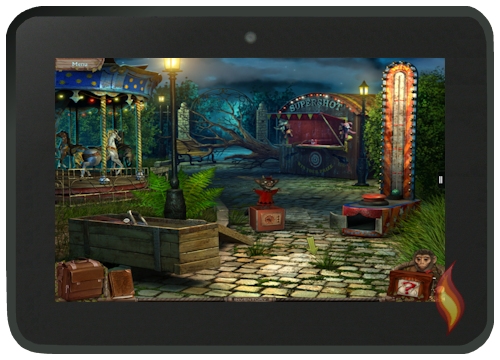 For some reason, I'm not a big fan of Nevosoft games. They have a ton of hidden object games for the Kindle Fire and I've tried a few, but rarely finish them.

I think this might be due to the lack of challenge for me, so I think these games might be better for those who don't want too touch of a challenge, or a younger audience.

This doesn't mean that these games aren't great, they're just not right for me.

This game has a very creepy feel to it that actually gave me goose bumps once. It's quite a well done game for the Kindle Fire and kept me entranced until I finished it, but I was glad it was over when I was done.

I'm a bit of a softy and don't do creepy very well, and never horror. So, kudos to the developers who created this game!

I would NOT recommend letting children play this game, as I don't feel it's appropriate for a younger audience, however that is my opinion of course. 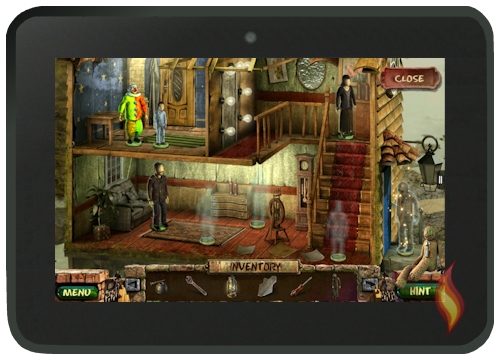 Theatre of the Absurd

This game has a very dark evil/spooky feel to it and is definitely not appropriate for children (in my opinion). If you like to be creeped out then this is the game for you! 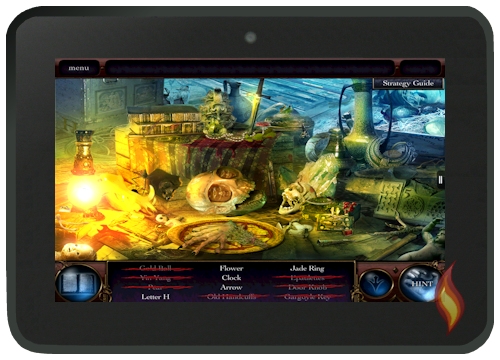 This series of games were original created in the 90's and were some of the first "point and click" type computer games. They've been updated to work on the Kindle Fire and are quite fun to play.

There's a lot of dialogue between characters, but that's how these older games were made back then.

I remember as a kid playing games like these with my brothers. Is anyone else old enough to remember Hero's Quest and King's Quest? 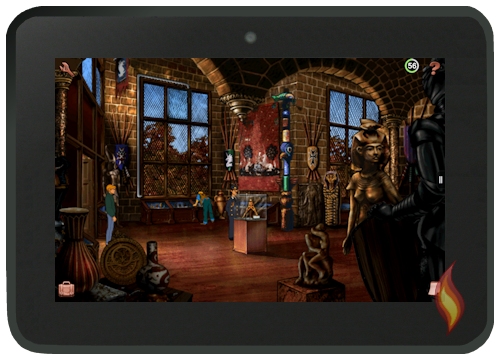 I'm a big fan of the Mystery Case Files (MCF) because they are the very first Hidden Object/Detective games I came across several years ago.

I've paid for and played almost every one of them on my PC, so I haven't bothered to purchase this game for my Kindle Fire, but I'm sure it's just as fabulous on a tablet as on a computer screen.

I'm a bit surprised this is the one they started with (as there are several in the series before this) but of course it plays great as a stand alone game. I hope they come out with the rest in the MCF series!

If you're looking for some fun, yet creepy games this would be a great one to play.

This isn't the best hidden object/detective game for the Kindle Fire, but it was still fun to play. The colored mist puzzle at the end was quite creative, I thought.

It did have some challenge to it because I got stuck a few times, but in the end I always finish these types of games- probably because I'm a bit obsessed with "winning" them.

This game is definitely a winner! It was super creepy with gorgeous artwork, excellent games and lots of fun detective work.

Please note that there are some references to torture in this game, in case you have a touchy disposition (which I do, but I made it through this game without too many scars.) ;)

I absolutely loved the beautiful angel that would appear throughout the game; here's a picture of her that I was able to capture in a screenshot: 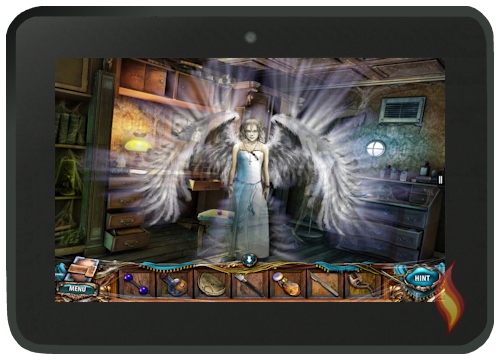 This game isn't quite like the other detective games, it's more of an "escape the room" type games. However, it has a lot of puzzles, clues, objects, and excellent artwork.

In this game you have a box that you have to figure out, but as you solve puzzles you find even more intricate puzzles within this unique box.

The clues and puzzles are tricky, which is one of the reasons this game is so fun and popular. It's a challenge, but doable! 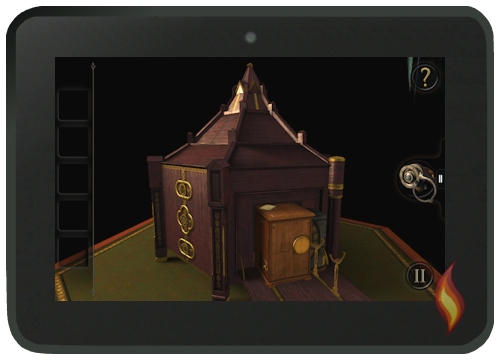 Do you love these kinds of games for the Kindle Fire too? If so, submit your favorite game and share with us what you like about it!