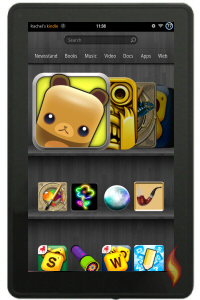 This list is of Free Games for the Kindle Fire. Yeah! 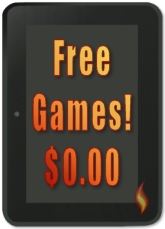 These free Kindle Fire games are not listed in a particular order, so be sure to browse through each one; you're sure to find some new gems and treasures to add to your collection!

I'll continually be adding new free games to this list so be sure to check back often or subscribe to my Kindle Fire Alerts to be notified of the latest updates.

This game is popular for a reason: it's a ton of fun! Plus it's a free game for your Kindle Fire. This super fast, intense game is simple to play yet difficult to master.

As you run for your life from a horde of giant angry monkeys you collect gems (coins) which you can use for power-ups.

Update: There's also a second version now available which is just as fabulous (if not more so) than the first!

Disney has a new version of Temple Run, this time based on the new movie, OZ.

I haven't yet tried this game but it looks fabulous, so I need to get it and play it myself!

There's another version of this game (by a different developer) that recently hit Amazon's App Store. TheEndApp is an apocalypse running game as you run from the end of the world.

These free Kindle Fire games are based on a Japanese logic puzzle called nono (don't ask me how to pronounce it, I have no-no idea). I first played this type of puzzle game with one of these FlipPix Art apps and have been hooked ever since.

There are several other nono game apps for the Kindle Fire but most aren't free. So if you'd like to try them out these free ones are great to start with.

There are currently several other versions of this game that cost a penny under two bucks. If you work your way through the Free Kindle Fire Games and are hankerin' for more, there are tons to choose from. 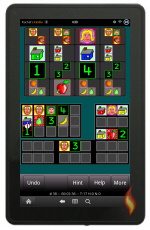 This free Kindle Fire game is a retro game from way back in the early 1990's, one that I remember playing on my old Windows 3.0 computer (I think it was that one).

It hasn't been updated, so that means the graphics are still as ugly as they were back then, but the game play is still fun!

I'm actually addicted to this simple puzzle game. It's a great one to wind down with at night before bed. I often play it until I'm drowsy and then off to sleep I go!

The free version of this game comes with 30 puzzles so once you've mastered those you're ready to move on to one of the paid versions.

I'm currently on the Pro pack. It will be awhile until I've played all 600 puzzles before I'm ready to buy the Ultra pack with its 7,500 puzzles! At the rate I'm going I'll eventually get there, but then I should be good to go as I'll probably get sick of it before I finish all the puzzles... although maybe not. Time will tell.

If you haven't yet played Fruit Slice it's a great free Kindle Fire game to download and play. There's a similar game called Fruit Ninja by a different company if you'd like to have some optional versions of the game.

Optional Versions: (by other developers)

I prefer Fruit Slice, myself, but the two games are basically the same for the most part. 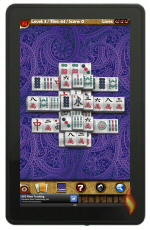 This basic Mahjong game is a great free Kindle Fire game for your tablet. It comes with a ton of different boards and other features, such as different backgrounds, tile colors/shading, and more!

If you're new to Mahjong there are several free versions available in the Amazon App Store, this is just one of them.

Here are a few more of the nicer free ones below.

Optional Versions: (by other developers)

Here are several more Sudoku puzzles you can try out too.

As a classic game, checkers makes for a great free Kindle Fire Game. This game lets you pass your tablet back and forth to play with a friend, or you can play verses one of the AIs.

Here are a few more checkers games from other developers which come with both a free and a paid version.

Last but most definitely not least, this may be one of my favorite free games! It's simple to play - just tap the black keys as they race past and create beautiful piano music!

Hit a white key, however, and you'l have to start again!

There are lots of different modes to try to keep things interesting, but honestly - I never tire of the classic version, which is totally addicting! 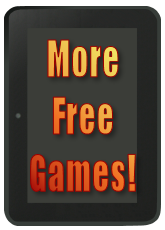 This is just the beginning because I've added a second page with even More Free Kindle Fire Games.

I'll continually be adding more games to the second list so return often or sign up for my Kindle Fire Alerts to be notified of new updates.

If you've already checked out both lists then maybe it's time to see all the other goodies on my Kindle Fire Games page, including my list of the BEST games!